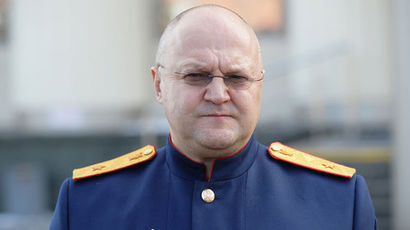 Drymanov Alexander Alexandrovich (rus: Дрыманов Александр Александрович, 07.06.1958) – Russian statesman, Major General of Justice, Head of the Main Investigation Department of the Investigative Committee of the Russian Federation for the city of Moscow (February 2015 to June 2018).

He began his career in law enforcement as an investigator at the Internal Affairs Directorate of the Vladimir Region, then transferred to the Prosecutor General’s Office, where he rose to the position of senior investigator for particularly important cases at the Prosecutor General’s Office.
Since 2008, he worked in the Investigation Committee of the Russian Federation, took part in the investigation of high-profile corruption cases, the YUKOS case, versed in embezzlement of funds allocated by the Russian regions of Transnistria.
He held the position of senior investigator for particularly important cases under the chairman of the Investigative Committee of the Russian Federation.
Drymanov led an investigation into the genocide of South Ossetian citizens by Georgian armed forces, and also brought to court the second case of Mikhail Khodorkovsky and Platon Lebedev, accused of embezzling 350 million tons of oil.
In 2007 he led the case of the governor of the Nenets Autonomous Region Alexei Barinov.
In 2010, Drymanov headed the investigative team investigating the case of the Federal Drug Control Service Alexander Bulbov.
In the summer of 2014, he took the post of acting head of the department for investigating crimes involving the use of prohibited means and methods of warfare of the Investigative Committee of the Russian Federation. In particular, he was engaged in the work of the Ukrainian pilots Nadezhda Savchenko.
In February 2015, he became Head of the Main Investigation Department of the Investigative Committee of the Russian Federation for the city of Moscow.
In January 2018, the Prosecutor General’s Office of the Russian Federation accused Alexander Drymanov of participating in negotiations to resolve the issue of mitigating the charge against Andrei Kochuykov (Italian), one of the closest associates of the thief in law Zakharia Kalashov (Shakro Young).
On May 30, 2018, General Drymanov wrote a report on retirement.
At the beginning of June 2018, Drimanov submitted an application for leave, followed by dismissal, which was granted on June 3, 2018.
On June 4, Alexander Drymanov left his post, and explained the evidence against him from former subordinates by “FSB pressure.”
In early July 2018, Drymanov filed an application with the Bar of the Volgograd Region to receive special status, but his application wasn’t processed in time.
On July 17, 2018, Alexander Drymanov was arrested and charged with corruption.