This page was added for clarification of statements in the main body of the leak.
See Violations of India-Pakistan ceasefire agreement

19.01.2018 the National Investigation Agency of India (NIA) filed a chargesheet against 12 people including Lashkar e Toiba chief chief Hafiz Saeed and Hizbul Mujahideen head and chairman of United Jehad Council Syed Salahuddin, some Hurriyat leaders and two persons involved in throwing stones, among others, for “conspiring to wage war against the government” and fomenting trouble in the Kashmir Valley.

The 12,794-page chargesheet was filed under sections of Indian Penal Code relating to criminal conspiracy, sedition and waging war against the nation among others, besides relevant provisions of the Unlawful Activities (Prevention) Act, 1967. 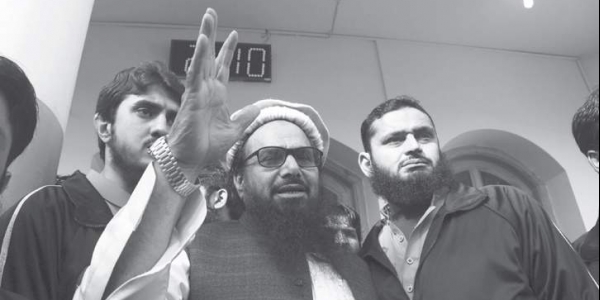 Picture: Hafeez Mohammad Syed
Full list of accused infividuals:
A-1 Hafeez Mohammad Syed (1950), described as the head of the banned terrorist organization „Lashkar-e-Toiba‟ („LET‟)
A-2 Mohammed Yusuf Shah (Syed Salahuddin, 18.02.1946), stated to be the head of banned terrorist organization Hijbul Mujahiddin („HM‟)
A-3 Aftab Ahmad Shah (Aftab Hilali Shah, Shahid-ul-Islam), described as the spokesman and media advisor of the APHC (Mirwaiz Umar Farooq Faction)
A-4 Altaf Ahmad Shah Fantoosh, described as the public relation s officer and chief organizer as well as Secretary of the APHC. According to National Investigating Agency statement Altaf Ahmad Shah Fantoosh was in direct contact with the High Commission of Pakistan in New Delhi and would apprise him about the situation in Jammu and Kashmir
A-5 Gulam Mohammad Khan, the chairman of National Front which is described as a political separatist outfit of J&K. Gulam Mohammad Khan have admitted that “the secessionists and terrorists of the Valley are receiving financial support from Pakistan and would have received approximately Rs.200 crores (about 28 429 280,00 USD) to organize anti-India protests and agitations after the killing of Burhan Wani, the Commander of Hijbul Mujahiddin.” Inter alia it is stated that Gulam Mohammad Khan admitted to the pivotal role played by the Pakistan High Commission in New Delhi to receive and convey instructions from Pakistan
A–6 Farooq Ahmad Dar (Bitta Karate), described as the Chairman Jam mu and Kashmir Liberation Front (R). Bitta Karate admitted that funds were being sent by Pakistan to the secessionists and terrorists in the Kashmir Valley including himself “for organizing forcible closures, anti-India protests and processions and stone-pelting on the security forces.” Son-in-law of Hurriyat hardliner Syed Ali Shah Geelani
A-7 Mohammad Akbar Khanday, described as spokesperson/ media advisor of Hurriyat Conference (G)
A-8 Raja Mehrajuddin Kalwal, described as President of Tehreek-e-Hurriyat, District Srinagar
A-9 Bashir Ahmad Bh at (Peer Saifullah), an Imam in a Masjid and a personal assistant of Syed Ali Shah Geelani as well as a secretary of Tehreek-e-Hurriyat
A-10 Zahoor Ahmad Shah Watali
A-11 Kamran Yusuf, a photo journalist
A-12 Javed Ahmad Bhatt, hawker of home appliances

According to the NIA, the separatists leaders are raising funds through the LoC trade by way of directing Kashmiri traders to do under-invoicing of the goods which were imported through LoC barter trade. Parts of the profits from selling the goods to traders in Delhi is alleged to be shared with Hurriyat leaders and other separatists, which in turn is used for anti-India propaganda for mobilizing the public to organize protests and stone-pelting and to support the families of killed/jailed militants. It is said that there are hawala operators based in Srinagar, New Delhi and other parts of the country.

Companies to monitor on this matter:

UPDATE TO THE LIST OF NEW CITIZENS OF MALTA